The apex bank announced in a circular issued Wednesday, Dec. 21, that individuals can now withdraw N500,000 cash weekly and corporate entities can now withdraw up to N5 million cash across all channels including Automated Teller Machines (ATMs) and Point Of Sale (PoS) terminals.

The circular was signed by its Director of Banking Supervision, Haruna Mustafa.

The directive becomes effective from January 9, 2023.

Recall that on December 6, 2022, the CBN ordered Deposit Money Banks (DMOs) and other financial institutions to ensure that weekly over-the-counter (OTC) cash withdrawals by individuals and corporate entities do not exceed N100,000 and N500,000, respectively.

See the released statement by the CBN Below:- 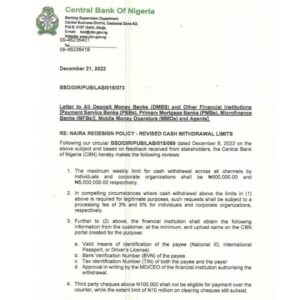 It’s believed that it was the outrage from Nigerians and the National Assembly that forced the CBN to adjust the directive.