Bauchi State Governor, Bala Abdulkadir Mohammed has charged the residents of villages surrounding Duguri District of Alkaleri Local Government Area to rise up, take up arms and defend themselves against bandits.

It was gathered that armed bandits have so far k!lled 20 people and wounded several others in villages in the areas.

Recall that a few weeks ago, operatives of the Bauchi Police Command in collaboration with local vigilantes stormed Alkaleri forest k!lling 12 suspected bandits including one of the kingpins that had terrorized the area.

The Governor who visited the area on Thursday, December 29, 2022, described the situation as an unfortunate and unacceptable trend that must be stopped at all costs.

Speaking at the palace of the district head of Yelwan Duguri, the governor lamented that the activities of bandits in the area are getting out of hand as the people can no longer engage in farming which is their mainstay.

“Rise up, take up arms and defend yourselves. You are known to be men, you should not allow these bad elements to subdue you, defend your land and liberate yourselves,” a visibly angry Mohammed said.

The Governor who also charged security agencies to shoot on sight “bandits and criminals who come to terrorise and killing our people” further urged the people to search themselves and bring out the bad eggs amongst them who are serving as informant to the bandits stressing that without inside information, the bandits cannot operate.

He then assured that his administration will continue to work assiduously in collaboration with the security agencies operating in the state to protect lives and properties of innocent citizens.

At Kafin Duguri, the governor commended the people for standing to defend themselves from the attacks of the bandits by wading them when they attempted to invade the village.

“That is the way it should be, we should defend ourselves from any form of banditry and criminal activities. What you did was the right thing and you should continue to do that even to your neighbours.”

The governor told them to take up arms against the bandits and k!ll them if they try to attack.

I know you people to be warriors including your women, rise up, defend your people and the neighborhood from the activities of the bandits,”

He, however, expressed optimism that very shortly banditry will come to an end in area as “my administration will support you with logistics, equip you and arm you to be able to fight and repel the attackers.”

The governor declared that, “from now on, anyone who comes to attack you to kill you, defend yourselves, attack and kill him, they can’t stop us from living in peace. All these communities have been existing over 500 years, we will not allow these Zamfarawa (bandits) to chase us away from our ancestral land.”

He then assured the people that very soon a security outpost will be stationed in the area to collaborate with the locals to beef up security in the area just as he promised adequately compensate the families that lost their loved ones to the attack of the bandits.

The governor commended the district head for trying his best to keep the people together in spite of the activities of the bandits urging him not to relent as government will always support his efforts.

In his remarks, the district head of Yelwa Duguri, Alhaji Adamu Mohammed Duguri lamented that the bandits had in recent times attacked communities in the area killing people, destroying their houses and rustled their cattle.

He specifically mentioned Rimi village as the worst hit as 20 people were killed during the attacks while their attempt to attack Kafin Duguri failed as the villagers rose to defend their village. 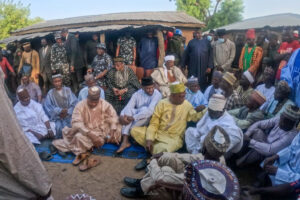